The Pacifier Review with Nanny or Manny 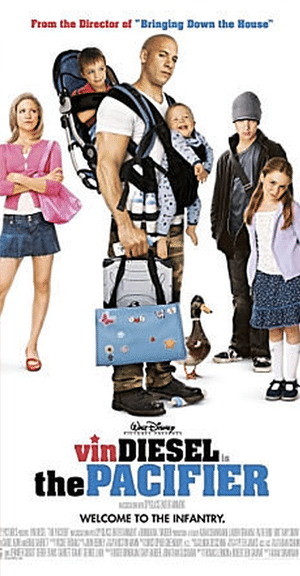 I have always like Vin Diesel’s action movies ever since The Fast and the Furious. The Pacifier movie is another slightly different action movie which shows the other side of him. It should be the early first few movies that cast man as nanny. A male nanny who babysit children is not confinement nanny but is better known as Manny. It is impossible for man to be confinement nanny but who knows? The trend for manny is rising and it seem in western countries nowadays, a nanny job is not just for women only. Has the role changed? We see women are able to take up leadership in armies, MNCs and men are experts in cooking, hairdressing, beauty care, fashion. Will a manny do a better job than a nanny?

See actions in a comedy way with Vin Diesel as Lieutenant Shane Wolfe who need to change diapers for Red baby besides the usual guns and cool action stunts. The Pacifier has a PG rating which means there is certain violence involved that you may want to watch over your kids if they ever have chance to watch this 2005 movie. Being a guardian of the family, Shane has the responsibility from taking care of baby to toddler and even teenagers who have their own thinking. He will be the most ideal type of person in making sure the children are not late for school as punctuality is critical in missions. Will instilling army discipline works well with young children? It’s very often the time when the stricter the nanny or parent is, the more the children want to rebel, up to mischief and want to disobey. Although children may get to listen to your orders by frightening them, it will leave a scar in their heart due to fear.

Have you heard the story of the Sun and the Wind? They have a competition in who can take off the coat of a man walking down the pavement. Who do you think will win? The Sun or the Wind? The wind starts by blowing hard at the man but no matter how hard or fierce he blows, the man held onto his coat even tighter. The Sun just give out his warmth and the man take off his coat without much consideration.

Likewise, children are the same. They want adults to understand them, listen to them. They will be more open up when they are taught things they do not know. When Shane is able to give them security and protection, the children become more appreciative of him. The girl scouts are able to defend themselves when bullied. The girl learns how to drive with the encouragement from the manny. Babysitting is a kind of activity which is not just a matter of feeding the children, watching over them or change the diapers. It is a kind of mutual understanding and bonding with the kids. Encourage them, motivate them, getting involved in their activities, giving them love and warmth. When all these happen instead of violence, they will be more of willing to accept you. It is a heart warming moment when the kid say “Good night Daddy”. Both mummy and daddy have equally important roles in children’s growth. Will you consider a male nanny for your children too?